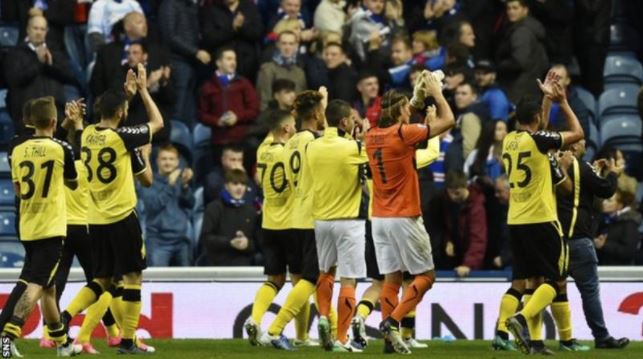 Rangers suffered a shock exit from the Europa League qualifiers on Tuesday evening, with the Scottish giants losing 2-0 away to Luxembourg’s Progres Niederkorn, a result which gave the minnows an unexpected 2-1 aggregate win.

Back in Europe for the first time in six years, Rangers would have expected to cruise past their opponents having registered a 1-0 win at Ibrox in the first leg.

However, second-half goals from Emmanuel Francoise and Sebastian Thill, via a free-kick cross-shot, secured the historic win for the Luxembourg side. Those goals were just the club’s second and third goals ever in Europe.

Niko Kranjcar, Josh Windass and Kenny Miller did all hit the frame of the goal as Rangers pushed for an equaliser.

However, Pedro Caixinha’s side would ultimately find themselves on the wrong end of a truly dreadful result – a result that saw Rangers knocked out of the Europa League some 317 days before the final.

Pedro Caixinha standing in a hedge, arguing with fans. What a night. pic.twitter.com/WaLSgh13Il