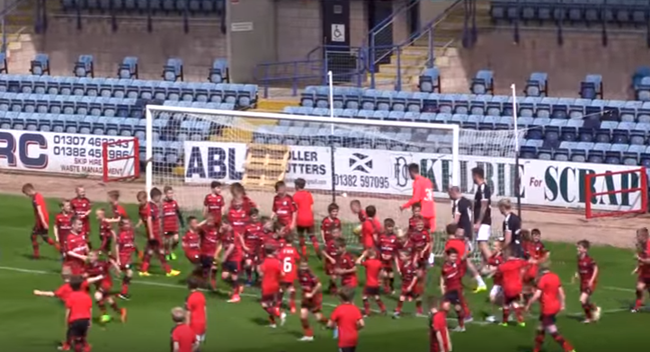 Dundee got their pre-season preparations off to a bad start, slumping to a comprehensive 5-2 defeat in their first friendly of the schedule.

There were, however, mitigating circumstances as the Dees’ opponents brazenly flaunted the rules to field a vastly overpopulated team.

Indeed, Dundee were swarmed by 100 local schoolchildren, who ganged up on the senior team as part of the launch event for Dundee’s new away kit…

Speaking to The Courier after the game, Dundee boss Neil McCann (who took charge of the kids’ teams) was impressed by the application he saw out there on the Dens Park pitch:

It was the guys’ first defeat of the pre-season but I’m hoping they’ll learn from it.

But I’m just delighted for my young team. I set them out to attack as a 99.

As for the full team, tonight’s follow-up friendly against Bolton Wanderers will probably seem like a stroll in the park.