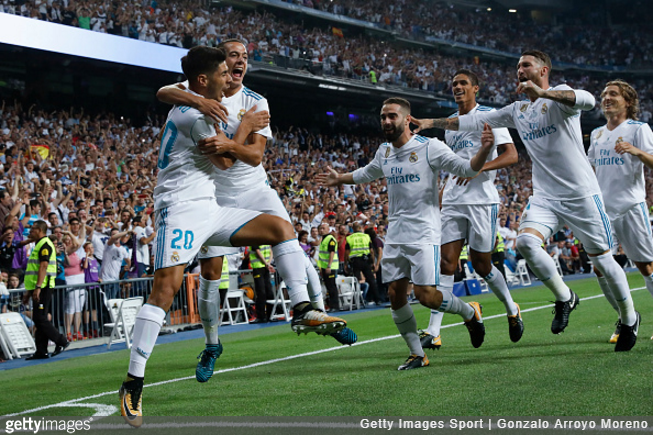 The £4.5million that Real Madrid paid Mallorca for Marco Asensio looks ever more certain to go down as the finest bargain in transfer history, with the 21-year-old forward continuing to mine his rich vein of form in the second leg of the Spanish Super Cup last night.

Asensio was on target with a sumptuous finish in the first leg and repeated the feat in the second, scoring the opening goal of the night as Real romped to a 2-0 win at the Bernabeu.

The home side continued to dominate as Barca looked sluggish and vaguely disinterested throughout.

Indeed, it was Karim Benzema who effectively ended the contest as early as the 38th minute when the French striker pounced with a close-range snapshot…

After seeing his number come up on the touchline 10 minutes after half-time, Gerard Pique received a rapturous chorus of ‘Se Queda‘ from the 69,000-odd Real fans inside the stadium while trudging off the pitch to be replaced by Nelson Semedo.

Fans of schoolboy shithousery also went home sated as we were also treated to some world-class childish misbehaviour from the grand master of the art form, Mr Sergio Ramos…

Apologies to anybody able to lip-read in Spanish there.

And so, the match ended 2-0 on the night, 5-1 on aggregate and Real Madrid looked utterly dominant throughout as they drew the first blood of the 2017/18 campaign.

Zinedine Zidane has now won as many titles as the amount of games he’s lost (seven) in the 19 months he’s spent as manager of Real, and he’s only competed in nine individual competitions.