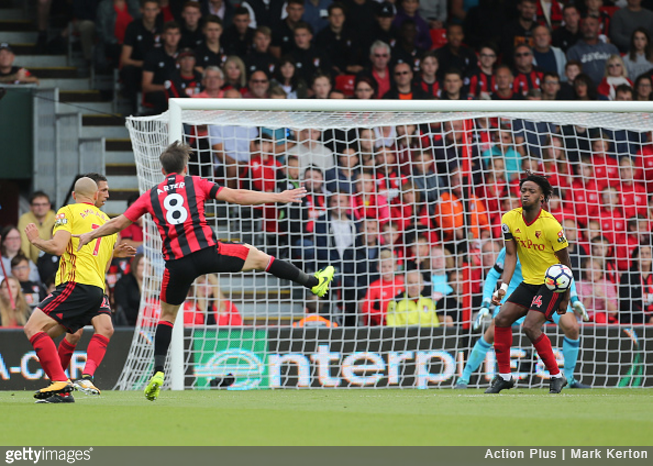 You can stick your 4-0 trouncings and debut upsets where the sun doesn’t shine – Pies’ undoubted Premier League highlight on Saturday was Harry Arter’s imperious deployment of Sunday League-level shithousing in Bournemouth’s home defeat against Watford.

Finding that his man, Nathaniel Chalobah, had escaped him on the counter-attack, Arter stooped to foiling the Hornets’ approach by emitting a fake “leave it!” call, causing Chalobah to dummy the pass for what he assumed was a teammate advancing in a better position.

Imagine his surprise, then, to turn round and see Arter scampering away with the ball like a master theif…

We’ve all done it in times of abject desperation – chasing that pacy striker, energy sapped to nil and last night’s nine-pint binge still sloshing away in your guts

Of course, Chalobah was well within his rights to protest. What Arter did is entirely illegal within the laws of football, with verbal distractions amounting to unsporting behaviour under Law 12 of the ‘Fouls and Misconduct’ section of the FA’s Big Book of No-Nos.

Foul and a booking being the correct sanction.

Still, we must admit we still get a pang of perverse pleasure when we see professionals get away with resorting to the most base of defensive dark artistry.