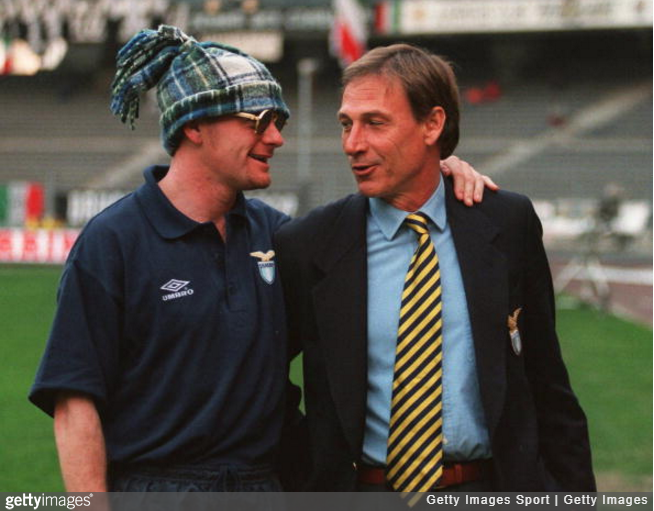 Yesterday marked the 25th anniversary of the day that Gazzetta Football Italia aired on Channel 4 for the very first time.

We’ve spoken of our undying love for Football Italia before here on Pies, helping as it did to introduce a wide-eyed young fan to a world of football beyond watching Wolves grind out dull, mud-specked draws with Leicester City on Central Match Live every sodding weekend.

Part of the appeal was of course James Richardson, a man so effortlessly good at his job that it is still positively sickening to this day.

In his role as host and calcio shaman, Richardson’s jocular, informed presence gave Football Italia a welcoming aura, without ever resorting to the tedious guffawing b*nter that continues to pervade all walks of British football coverage.

Still, the programme wasn’t without its fair share of comedic gold, as this slickly performed opening gambit with a freshly-shorn Paul Gascoigne (then of Lazio) duly proves…

For those not fluent in Geordie, allow us to furnish you with a transcription:

Gazza: “I’m sick to death of you. Honestly, you come here, you’re crawling, you’re a creep, you’re snivelling, you pester me, I’ve got no peace with you and I know the story with you and the goat! Now go on, out!”

Gazza: “Yes, Mr Zeman (Lazio coach), but will you let me play on Sunday?”

See what they did there? Magical stuff. Almost on par with Jimbo’s classic pun-laden double act with Elvis Costello up in the gantry at Fiorentina’s Stadio Artemio Franchi.

And, of course, it would be utterly remiss of us to mention Football Italia without mentioning *that* opening sequence…