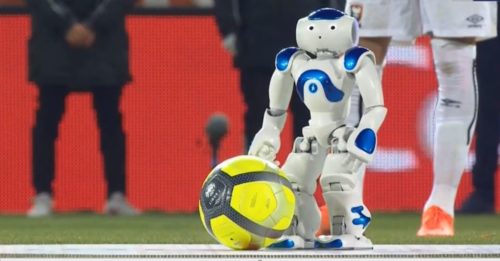 A tiny robot kicked off the Ligue 1 clash between Dijon and Caen at the weekend, in yet another episode which can definitely be filed under ‘Modern football is rubbish’.

Ahead of kick-off at the Stade Gaston-Gérard, a small robot was carried into the middle of the pitch while a video screen on wheels, showing a man’s live grinning face, followed.

After what seemed like an eternity, the robot gently kicked the ball before dabbing!

As you can probably tell by now, we’re not exactly 100% what was actually going on here but it was all very ‘futuristic’, in an awkward kind of way.

Although the robot’s lack of pace is sure to hinder its football career.