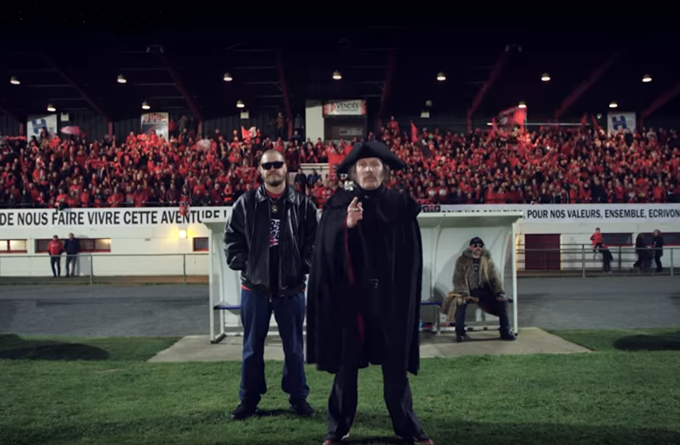 The very day after Les Herbiers went swashbuckling into the Coupe de France final, the third-tier minnows have already found themselves an unofficial battle hymn.

The tiny Vendée club will face PSG in the final at the Stade de France next month, and thanks to noted local fan Philippe Katerine, they now have an anthem to roar/rap whilst doing so.

Katerine, a native of the Vendée region and singer/songwriter by trade, has produced a song in collaboration with MC Curculaire called ’85 Rouge et Noir’ which sees our Philippe decked out in full town crier/dandy highwayman garb for reasons we don’t fully understand.

For those not fluent in the Gallic tongue, these are the auto-translated lyrics:

The red, the blood of our enemy,
The black, for our mourning.

As you can tell, it’s all a little heavier in terms of lyrical content that your average ‘tum-ti-tum let’s all play football’ FA Cup final song.

In fact, the heaviest an FA Cup song ever got was probably ‘Oh Millwall’ – Millwall’s official ditty from 2004 which took in such lyrical themes as the M4 motorway, Dennis Wise and rhymed the word ‘four’ with the number ‘4’ at least once.