It was the 2nd of July, 1980 and the day before their big concert in Nantes, Bob Marley and the Wailers found themselves on the prowl for a decent game of 5-a-side to help take the edge off.

Fortunately, it just so happened that the band’s management had been in touch with FC Nantes, who had just been crowned Ligue 1 champions a month or so before.

So, in a park in the middle of the city, Marley and the Wailers teamed up to take on a team made up of Nantes first-teamers, including Gilles Rampillon, Bruno Baronchelli, Loic Amisse, goalkeeper Jean-Paul Bertrand-Demanes and the great Henri Michel (who sadly passed away yesterday).

The Nantes players had all trained with Les Canaris that very morning, but still agreed to take part in what has become one of the most legendary casual kick-arounds in history. 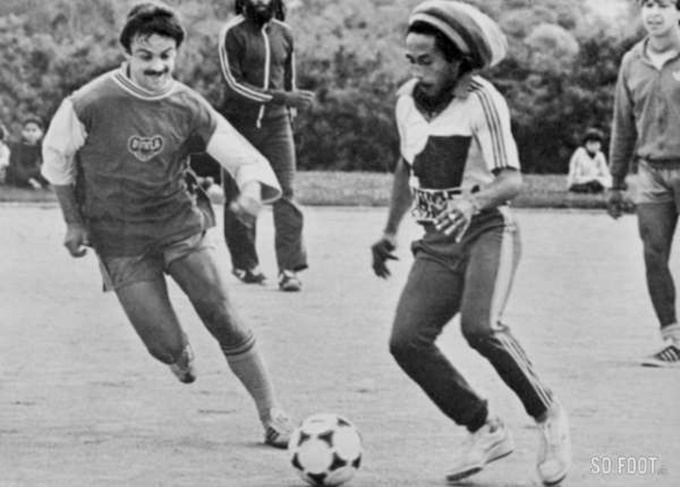 Bob Marley is closed down by Gilles Rampillon in his Dukla Prague away kit! (Photo: So Foot)

Marley was decked out in a classic yellow Nantes shirt for the occasion, while the professionals sported an array of attire – including Rampillon in his Dukla Prague away shirt, as so famously coveted by Half Man, Half Biscuit.

The Wailers then played to thousands of people at the Parc des Expositions the following day as part of their ‘Uprising’ tour of Europe.