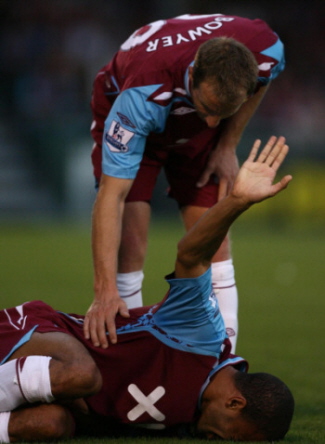 Kieron Dyer’s entire career summed up in a single photo

Sullivan has repeatedly stated that overheads need to be cut at Upton Park if the new owners are to stabilise the club as intended, and it seems that Dyer’s £60,000-a-week wages will be amongst the first of the unnecessary payments to be slashed from the club’s outgoings.

It looks like the former England man may have had his chips, as Sullivan has been quoted in The Daily Telegraph as saying;

“There is one player [at West Ham] who hardly plays at all who might have to accept retirement.”

That particular description fits a certain somebody down to the ground, now doesn’t it?

Dyer, now 31 years old, has only managed 18 appearances for The Hammers since joining from Newcastle in August of 2007 and has infuriated sections of the support for still being able to collect his substantial pay packet regularly, despite the fact that he has done the sum total of diddly-squat for two years.

Is it good riddance to defective rubbish for West Ham fans out there? Or just sad to see a once-promising midfielder being trotted off to the knackers yard?