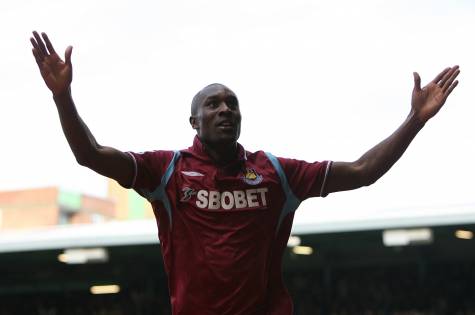 Striker Carlton Cole rounded off an awful night for West Ham by becoming involved in an altercation with a fan after the final whistle of their 3-1 home defeat at the hands of relegation rivals Wolverhampton Wanderers.

Police and stewards were allegedly involved in the scuffle while Hammer’s South African forward Benni McCarthy apparently saw Cole being dragged away by his own team mates;

“I thought Coley knew the guy at first as they were speaking normally. Eventually I saw some other players go back out and drag him inside. Maybe what went on today got to him and he reacted the wrong way.”

Goals from Kevin Doyle, Ronald Zubar and Matt Jarvis were enough to sink lowly West Ham, who managed a late consolation goal through Guillerme Franco‘s lobbed finish – but it was not enough to prevent the match ending in a rousing rendition of the ‘you’re not fit to wear the shirt’ chant from the Upton Park faithful.

The defeat was The Hammer’s fifth in a row and leaves them just three perilous points above the relegation zone. Manager Gianfranco Zola admitted after the game that the result was ‘very, very painful’ but encouraged the disgruntled fans to direct any criticism toward him and not the players who, he insisted, ‘tried everything’.