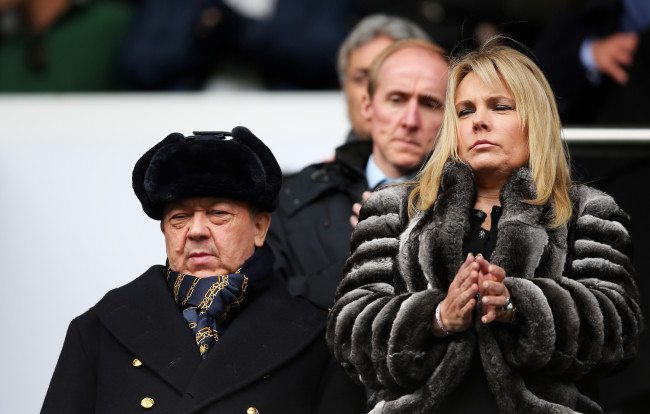 West Ham United owner David Sullivan has been talking with the Sunday Times. The Hammers are scheduled to move into the London Olympic Stadium from 2016 on a 99-year lease.

Long-term, there’s no reason we can’t be one of England’s leading six clubs, pushing for the Champions League. You have to dream. Otherwise what’s the point of being an owner or supporter? And we [he and co-chairman David Gold] are both owners and supporters.

Is The Plan To Use The New Ground To Advertise West Ham For Sale?

We have no desire to sell West Ham. We hope to pass it to our kids and grandkids. While the [stadium] deal is confidential, if we sell before 10 years most of the money would go to the government. We happily signed that, because we’ve no intention of selling. We’re only renting it for 25 matchdays. They [the public authority that owns the stadium, the London Legacy Development Corporation] have 340 days a year to get income off other people.

And Spurs, Who Wanted To Make The Move To East London?

We’re not here for a quick buck. We were the best bid. Tottenham were going to knock it down, this iconic stadium, which would have been horrendous. With us, the legacy lives on.

Slaven was probably the fans’ choice and has many admirable qualities. He’s an incredibly hard-working fellow, he’s really whacking in the hours, and he’s smart, a trained lawyer. He’s got stature. I think he’s got the fear factor like Mourinho and players will respect that… Slaven’s bonus structure is geared to success. Success isn’t surviving in the Premier League and it isn’t finishing 14th.

Who Picks The Team?

I don’t pick the players. We [Sullivan, Gold and Bilic] all talk then jointly decide. At this stage, you back your manager. Maybe in a year, if a few signings haven’t worked out, you say, ‘OK, I’ll pick a few’…

On The New Signings

The only one where I had input was Dimitri Payet. He was an equal pick with the manager. I really fancied him. He had the best assists in France and the third-best assists in Europe. And he got nine goals. He’s done well year in, year out. Marseille didn’t want him to go. He’s 28 — if he was 21 he’d be a £30m player… I look at [Andre] Ayew, who went to Swansea. Huge wages but, as a Bosman, not expensive overall. A very good player. Maybe we should have taken him.

It isn’t easy because you go down the list — Chelsea with Roman Abramovich, Manchester United with the best brand in the world, Man City with Abu Dhabi, Arsenal with a great system and having paid off their stadium, Liverpool with commercial income way ahead of ours. Then you’ve Tottenham — maybe we can pick Tottenham off. Tottenham are bigger than us at the moment but within striking distance.

Spurs have plans for big ground of their own – one larger than the rented Olympic stadium.