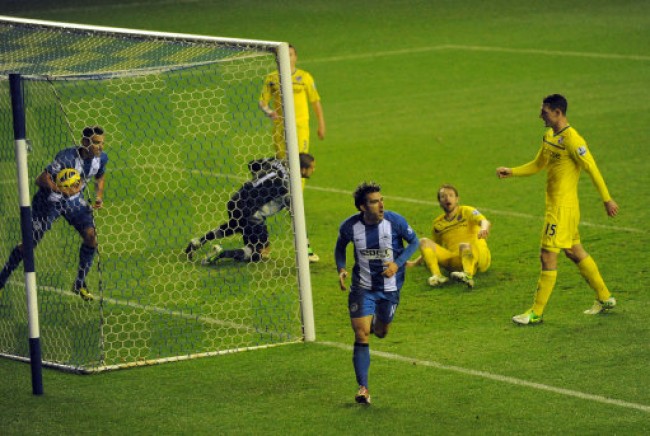 A second-half hat-trick from Spanish schemer Jordi Gomez, including a last-gasp winner at the death gave Wigan a precious victory against Reading at the DW Stadium.

The Royals impressed in the first-half and went ahead through young defender Sean Morrison, who bulleted a header past Ali Al-Habsi. After the break, Roberto Martinez sent on Franco Di Santo to add a bit more presence up front and just before the hour-mark the Argentinian set up Gomez who levelled the scores after Reading goalkeeper Adam Federici spilled the Spaniard’s initial shot.

Gomez then put the Latics ahead when he got his head to Jean Beausejour’s superb cross. However, with 10 minutes to go, Al-Habsi gifted the visitors an equaliser, when he failed to deal with a deflected high-ball, which ended up in his own net. Them, with seconds remaining, Gomez completed his hat-trick to give the home side a vital victory.

One incident which was potentially game changing was referee Howard Webb’s decision not to point to the penalty spot when Reading’s Jay Tabb was clearly fouled in the box. However, ultimately, it is Wigan who go five points clear of the drop-zone while the Royals stay in 18th, although Brian McDermott will have taken some comfort from the effort of his charges.