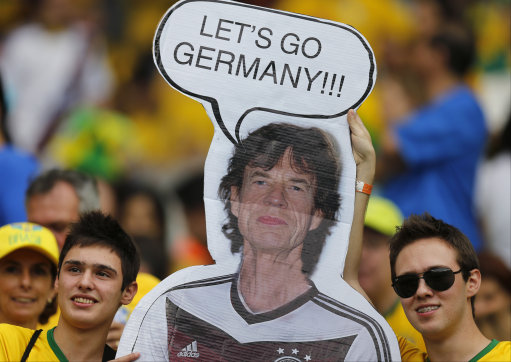 As is the done thing, the Brazilian press have attempted to make sense of last night’s sensational drubbing at the hands of Germany in the only way the press knows how – by finding a scapegoat and then rogering it into submission.

However rather than Juan Zuniga, Big Phil’s drippy tactics, David Luiz’s inability to lead a defensive line or Fred’s inability in general, the collective Brazilian press have decided that the man responsible for La Selecao’s humiliating downfall is none other than Rolling Stones frontman Mick Jagger.

Jagger attended last night’s semi-final at the Estadio Mineirao and was spotted in the VIP box cheering for Brazil with his son, Lucas.

This caused Brazilian hearts to sink, knowing full well that a seal of approval from Jagger is akin to a kiss of death in terms of tournament football.

You see, Jagger is known as “pe frio” by Brazilian fans (a term meaning “cold feet” which is used to refer to someone who is jinxed) after the singer sported a Brazil shirt to attend the 2010 World Cup quarter-final between Brazil and Holland. No prizes for guessing who won that particular fixture.

Jagger’s uncanny knack of publicly backing the eventual losers has continued apace at the 2014 World Cup, with the 70-year-old telling fans at a recent Stones concert in Rome that Italy would beat Uruguay to make it through to the knock-out phase before the Azzurri duly went and whimpered out at the first hurdle.

After also backing England to also progress before what happened happened, Jagger then told fans at a gig in Lisbon that Portugal were his new favourites to go all the way in Brazil and win the tournament outright.

Do you see a pattern emerging here?

Anyway, Brazilian news network R7 ran with a series of photos on their website of Jagger perched in the VIP box in Belo Horizonte, denouncing Pe Frio as “invincible!” and “the biggest jinx in history”.

In fact, the amount of abuse being flung at Jagger led one of his ex-girlfriends, Luciana Giminez, to accuse her compatriots of “cyber-bullying”.

“Mick has been successful for 50 years, he’s a good friend and GOOD FATHER to my 15-year-old son,” she wrote on Instagram.

“He is suffering cyber bullying …. and I would like to ask you guys who do this kind of bullying to think before you do it.”

“Even though it only seems like a small thing, Mick is a person like us all, and he does not deserve to be treated this way by Brazilians.”

Shouldn’t be such a massive Jinxy Jinxington then, should he?