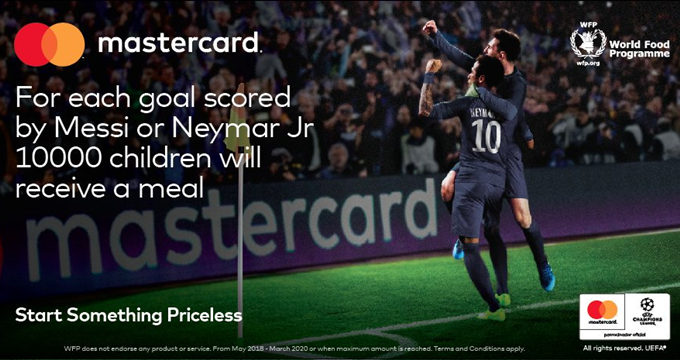 Mastercard have quietly scuttled the World Cup campaign they launched last week that would have seen the company donate meals to hungry children every time Lionel Messi or Neymar scored at the tournament in Russia.

Run in conjunction with the World Food Programme, an offshoot of the United Nations, the idea was that Mastercard would send 10,000 meals to starving kids around the world every time either of the aforementioned player found the net.

Unsurprisingly, the campaign was met with a wave of consternation upon launch from critics who pointed out that introduction of such entertaining sporting jeopardy to the issue of worldwide poverty and hunger might not be the most wholly-conceived notion – ‘Just give the kids the food and stop being daft’ being the general jist.

Mastercard have since issued a statement via the Associated Press to announce that the campaign has been dropped:

We don’t want fans, players or anyone to lose focus on the critical issue of hunger and our efforts to raise support for this cause.

Based on the feedback, we are adjusting this campaign to replace the 10,000 meals donation per goal by Messi and Neymar Jr. with a contribution of one million meals in 2018.

This is in addition to 400,000 meals we have already donated as part of the campaign.

There you go. Wasn’t that difficult, now was it?

It’s fine if you’re knocking a tenner of the price of a television every time Messi scores, but the same code of best practice does not apply when you’re talking about playing fast and loose with the well-being of vulnerable children.