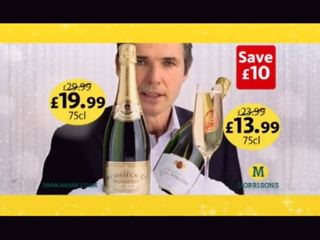 Supermarket chain Morrisons have called upon FIFA to dole out £1 million in the way of compensation to British ‘grassroots’ football, in return for what they are calling an ‘unfair’ World Cup bidding process.

The supermarket have also apparently detailed lawyers in Switzerland to examine whether or not compensation can be legally claimed.

‘Why are they so concerned over FIFA’s bung-happy antics?’ I hear you cry in unison.

Well, it just so turns out that Morrisons were one of the unsuccessful England 2018 bid team’s principle sponsors, i.e. it was their ill-invested cashola that went towards getting that stupidly expensive ‘What Milton Keynes and Plymouth can do for You’ pamphlet printed up.

Morrisons mouthpiece, Richard Taylor, has this to say:

“The FA team put together a fantastic bid. On behalf of our customer we are disappointed that the merits of the bid were not recognised by FIFA, which clearly was intent on locating the 2018 World Cup in an emerging country.

“As we think the decision-making process was unfair, we have instructed lawyers in Switzerland to examine our options under Swiss law.

“We hope FIFA will do the right thing and offer £1million to be invested in grassroots football.”

Still bad losers are we Sepp?