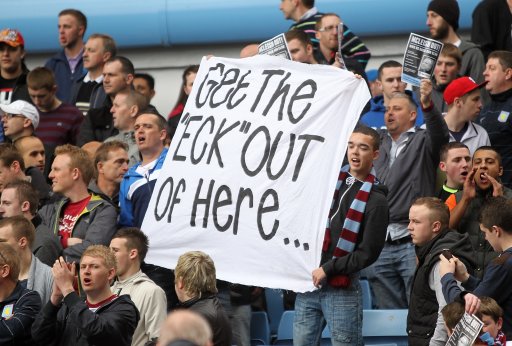 The deed is done.

After 11 months of plop, it’s now officially ‘game over’ for Alex McLeish at Aston Villa – and if that news surprises you in any way then may we be the first to congratulate you on getting through your first week here on Earth unscathed.

Watching him idly clapping the Villa fans while being barraged with a hearty rendition of ‘Sack McLeish, My Lord’ after losing to Norwich on the final day of the season, you kind of got the inkling that his ‘meeting with the owners’ the following day wasn’t going to go particularly well. A 16th-place finish, two points above relegation with the highest draw rate (43%) and the lowest goals-per-game rate (0.96) in the Premier League this season probably didn’t help either.

We hear that the announcement would’ve been made sooner were Villa not waiting for McLeish to clear out his desk at Bodymoor Heath. The delay was caused due to a massive surplus of drawers. Drawers? Draws? Geddit?

Aaaaanyway. Like a pallid Glaswegian day-walker feeding on West Midlands club’s lifeblood, Eck has gradually sucked all of the effervescence out of Villa (Pies hate to say we told you so but…we bloody well did!) and the penchant for conservative tactics only got worse as their wretched season went on. They gradually went down through the spectrum from defensive counter-attacking football, to focusing solely on nullifying their opponents, to all-out ‘Heskey up front on his own’ 0-0 preservation over the course of ten months. Not the kind of thing that fans usually take too warmly to.

Who’s next for Villa? Well, we’ll have a shilling on Roberto Martinez and Paul Lambert receiving calls from Randy sooner rather than later. Whether either will budge is another matter.