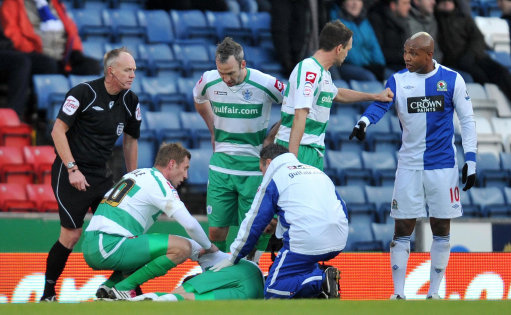 QPR striker Jamie Mackie has admonished the behaviour of ‘repulsive’ Blackburn winger El-Hadji Diouf after the Blackburn winger apparently goaded the stricken striker as he lay prostrate on the turf having just suffered a broken leg (a double fracture, no less) when the two sides met in the FA Cup on Saturday.

Mackie, who was injured when a challenge with Rovers’ defender Gael Givet left both players sprawled on the ground, told The Sun:

“I’m lying on the floor with a bad injury and even his team-mates were embarrassed by what Diouf was saying. There’s no room for that in the game – and in my opinion he’s an absolute disgrace.

“I’m trying hard not to think about Diouf. That’s because when I do it makes me want to snap my cast off and run up there and find him.

“There’s no place in football for the likes of Diouf. There’s a line and he crossed it. Diouf was repulsive.”

After the game, QPR manager Neil Warnock was also livid at Diouf’s conduct, refusing to liken the Senegalese forward to a ‘sewer rat’ as it could be deemed as an insult to the festering rodents:

“The lads were furious with Diouf. [Mackie] had broken both bones in his (lower) leg and Diouf is calling him all sorts on the pitch. There was no need to put the finger up and call him a disgrace and even the Blackburn people were embarrassed.

“I can’t abide people like that, I don’t know why he wants to take on the world every week. For many years I have thought he (Diouf) was the gutter type – I was going to call him a sewer rat but that might be insulting to sewer rats.

“I think he is the lowest of the low and I can’t see him being at Blackburn much longer…I think he will be the first to go and good riddance – I hope he goes abroad because I won’t miss watching him. He is a nasty little person.”

It’s not often I find myself siding with Neil Warnock, but it’s hard to argue with him on this particular occasion. Diouf is an odious little turd, and has once again proven himself to be little more than a sh*tty smear on the face of the modern game.