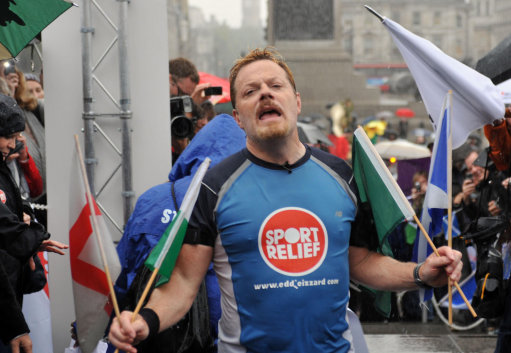 Cross-dressing, multi-lingual marathon man Eddie Izzard has joined the ranks of the celebrity football directors by joining Crystal Palace as an Associate Director. The 50-year-old surrealist has been a fan of the Eagles all his life and is eager to see his beloved side get back into the Premier League. In a statement on the club website, the Yemen-born comedian said:

“I am very happy to lend my support to Crystal Palace FC by becoming an Associate Director of the club. With Dougie Freedman as our manager and the new young players coming up through our Academy – I hope that Crystal Palace will be pushing forward to new heights with all of them succeeding to the best of their ability – and further.

“All I really want is for Crystal Palace to win every game from now until the end of time. That’s all. I know that’s a tough thing to ask but that really is what I want. You see, I’ve been a fan or a supporter of Palace since 1969. At times I’ve been a fan and at times I’ve been just a supporter because I’m afraid I’m a bad loser and if we don’t win games – I don’t deal with it well. I tend to swear in front of children and shout at televisions in pubs. I know everyone has to deal with this and I’ve tried to mature my behaviour as my life has progressed, but in this one area I am still like the teenager I was in the 70s, living and dying every week for the football games I was playing myself or watching Palace play. “

Interestingly, after Izzard’s statement ends, we learn that it seems anyone can join Izzard as a Palace Associate Director –

“An Associate Directorship includes full hospitality in the Boardroom at every home game for two guests and is a fantastic way to enjoy football. As well as meeting Directors from other clubs it is a great way of business networking and entertaining. Packages are still available for the 2012/13 season. For further details contact Phil Alexander, Chief Executive of Crystal Palace on 020 8768 6001.”

So it’s not quite hitting the heights of Delia Smith at Norwich City, Sean Bean at Sheffield United or Lady GaGa at Morecambe (I made the last one up). Still, fair dues to Izzard for getting behind his club.