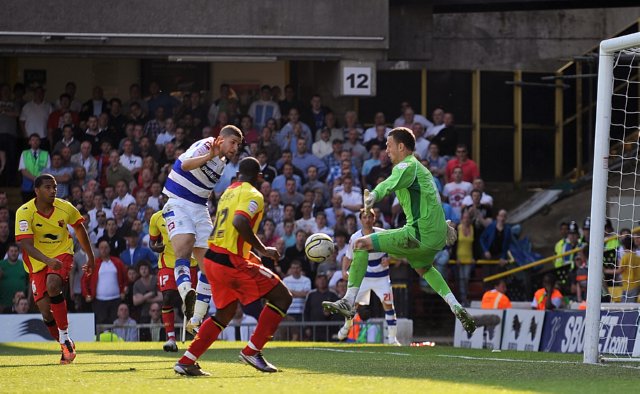 After topping the Championship table since mid-November, QPR’s 24th victory of the season – a 2-0 win over Waftord at Vicarage Road this afternoon – has ensured that the Hoops will be playing Premier League football come 2011/12 at the third time of askin, assuming that the FA hearing into Alejandro Faurlin’s transfer doesn’t bugger it all up for them over the next few weeks.

A point would have been enough to secure automatic promotion for the Hoops, but a stoppage time Tommy Smith strike coupled with Adel Taarabt’s 19th league goal of the season means that Neil Warnock’s side’s lead at the top of the table is now unassailable.

So, looks like there will be another London club in the top flight next season. Fantastisch.

Hearty congrats go out to the R’s and to Warnock – who will no doubt make the glum world of Premier League post-match interviews a damn sight more ‘interesting’ next term.

Down at the smelly end of the Championship, both Scunthorpe and Sheffield United have been relegated to League One this afternoon, with the Iron getting their hides tanned 5-1 by Nottingham Forest while the Blades could only muster a 2-2 draw with Barnsley.