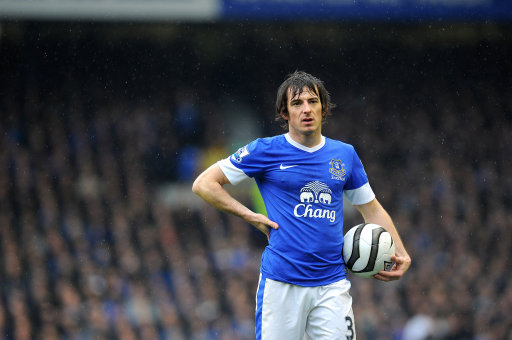 As part of a club initiative to give a little something back to their fans, Leighton Baines personally delivered a new season ticket to Toffees fan Gordon McKee’s front door earlier in the week after his wife sadly lost her five-year battle with a brain tumour recently.

Gordon was nominated by his son to be selected for Everton’s “Make Their Day” scheme to pay tribute to worthy fans after he provided round-the-clock care for his late wife during her illness.

Baines then turned up on his doorstep yesterday and handed over the 2013/14 ticket, as well as a bouquet of flowers and a signed shirt as a mark of respect from everyone at the club…

“We knew what a tough week it’s been for Gordon but I am pleased to cheer him up a little bit, as much as you can at a time like this. We’re looking forward to seeing him at Goodison next year.

“The decision was made that we should still go ahead and call in. I’m glad to see it’s a put a smile on his face. As insignificant as these things seem, it can brighten up someone’s day.”

While we’re not saying that other clubs don’t provide similar charitable schemes, you’ve just got to love Everton, haven’t you? A big club, run the right way.