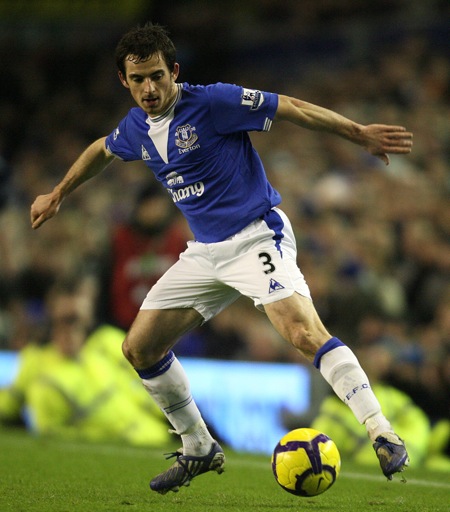 Leighton Baines made a slow start to his Everton career after signing from Wigan in 2007, but this season he’s been terrific, exactly the sort of all-action left-back you want. His link-up play with the likes of Steven Pienaar has been vital to Everton’s climb back up the table.

So why isn’t Baines more highly regarded by the England set-up? He should now be established as England’s second-choice left-back, behind Ashley Cole and definitely ahead of Wayne Bridge and other candidates (Gibbs, Warnock et al).

Is it because he’s too small (Roberto Carlos didn’t do so badly)? Or perhaps it’s his unfashionable face, which gives him the look of a young private in the British army, circa 1944? Or it could be because he’s too nice – no tabloid dirt = dull.

Whatever, he can defend and attack and he works like a terrier at both. He’s also an honest player, which Capello is rather short of at the moment.

David Moyes today backed Baines for England, saying: “I think the England left-backs will be Ashley Cole and Wayne Bridge and then I think it is toss-up between Stephen Warnock and Leighton Baines. I think Bainesy on his day is a match for any of them, and I know Fabio Capello knows about him.”

I think Moyes is probably right though, and as much as I like Warnock, I rate Baines slightly above him. With all English LBs fit, I’d take Ashley Cole, Leighton Baines and Kieran Gibbs. In that order.

As it is, I predict Capello won’t even take three authentic LBs to South Africa, not if he has Joleon Lescott, Gareth Barry and James Milner in the squad.