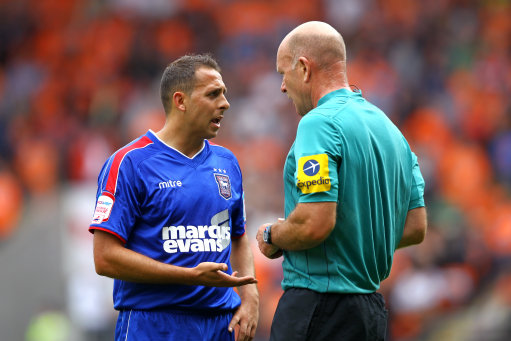 “Penalty? I’ll chuck you a fiver and a bag of lemon bon-bons?”

Ipswich striker Michael Chopra (government name: Rocky Michael Chopra) is one of three footballers who have been accused of offering bribes to jockey Andrew Heffernan following a lengthy investigation by the British Horseracing Authority.

Nottingham Forest’s James Coppinger and former Manchester United and England U21 midfielder Mark Wilson, who is currently without a club, are alleged to have colluded with Chopra in attempting to bribe 24-year-old jockey Heffernan to fix races.

All three men have been charged with conspiring to “commit a corrupt or fraudulent practice” under the rules of racing.

“If found guilty of the charges they face long bans from involvement with racing, including attending racecourses or talking to licensed individuals. The entry-level for the offences is a three-year ban.

“Heffernan, who is now based in Australia, faces five charges of corruption, including one of stopping a horse, one of accepting a bribe and two of breaking the rules regarding the use of inside information.

“If found guilty of stopping a horse – deliberately preventing it winning – he could be banned for eight years.”

Chopra has come clean in recent years about his crippling gambling addiction, admitting to having lost over £1 million (£20,000 a day at one point) over the course of a few years, and which has seen him admitted to rehab and the Sporting Chance clinic on several occasions.

Indeed, it’s even been reported that Ipswich have even agreed to pay a portion of his wages directly to his debtors to prevent him from spluffing it elsewhere.