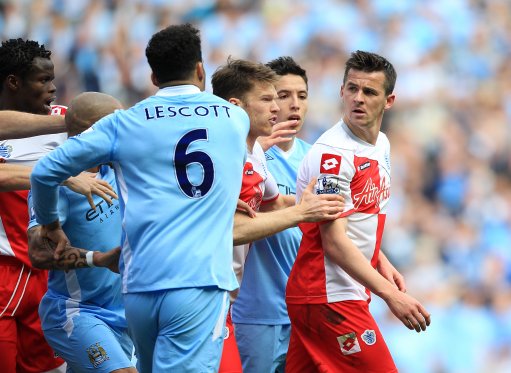 Kenny Dalglish wasn’t the only (adopted) Scouse star having a hard day of it on Wednesday. While King Kenny was clearing out his office, poor old misunderstood intellectual Joey Barton was preparing to fight The FA over a violent conduct charge relating to his meltdown against Man City last weekend.

The QPR midfielder did accept one charge of violent conduct relating to his sneaky kicking of Sergio Aguero after he’d been sent off for elbowing Carlos Tevez. However, despite clear video evidence showing Barton aim at headbutt in the direction of City captain Kompany, the former Newcastle man is denying a second charge relating to the attempted nutting. A statement from Loftus Road said:

“Queens Park Rangers Football Club can confirm that a full investigation in relation to Joey Barton’s dismissal and subsequent events against Manchester City on Sunday will be carried out following the conclusion of his FA hearing.”

“The club will be making no further comment at this stage.”

The Rangers bad-boy has also requested a personal hearing with The FA (date yet to be set), in which he’ll no doubt quote The Crucible and To Kill A MockingBarton.