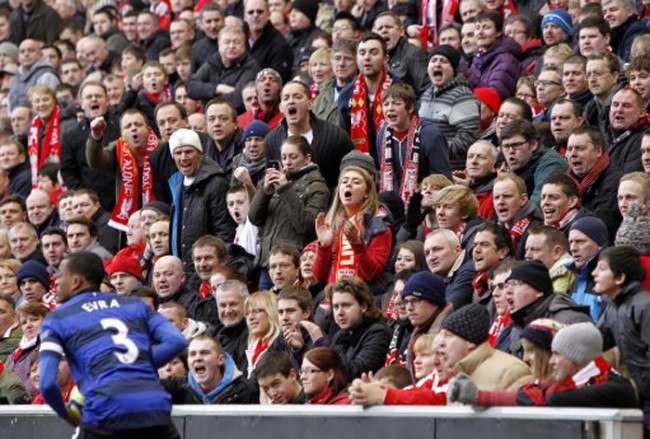 With Ryan Giggs and Paul Scholes going head to head with Steven Gerrard and Jamie Carragher, we could’ve been back in 2000, although the constant booing of Patrice Evra by the Anfield faithful belonged farther back in the dark ages. This fixture is innately incendiary, however for the Liverpool crowd to boo the Manchester United captain simply for being the victim of racism was utterly contemptuous.

Still, away from the controvery off the field, the game, from the off, highlighted David De Gea’s vulnerability in the United goal, with Andy Carroll and Martin Kelly crowding around the Spaniard whenever the Reds had a corner. Ultimately, this ploy would produce the goods for Kenny Dalglish’s men, when, on 21 minutes, Daniel Agger headed home after De Gea was caught in no-man’s land.

With half-time approaching, however, the visitors were back on level terms, when Antonio Valencia outfoxed Jose Enrique to set up Park Ji-Sung. The South Koren lashed home to make it 1-1 at the break.

United pushed for the winner, and were in control for much of the second-half, but with Danny Welbeck struggling up front, they couldn’t make their dominance count. With 18 minutes to go, Steven Gerrard was replaced by the in-form Craig Bellamy, and not for the first time, a Liverpool side without the sometimes domineering influence of their captain, started to find their rhythm again. And with just two minutes of normal time left, another sub, Dirk Kuyt, lost his marker Evra to fire home past De Gea and knock the Red Devils out of the cup.

Fair dues to the much-maligned Andy Carroll too, who worked hard in an extremely isolated role up front, before providing the assist for Kuyt’s winner. He almost scored himself at the death, only to see his close-range header come back off the woodwork.

With both Manchester clubs now out of both domestic cups, one of them will finish the season trophyless, unless they take the Europa League seriously. As for Liverpool, is this the beginning of a return to the good times at Anfield?