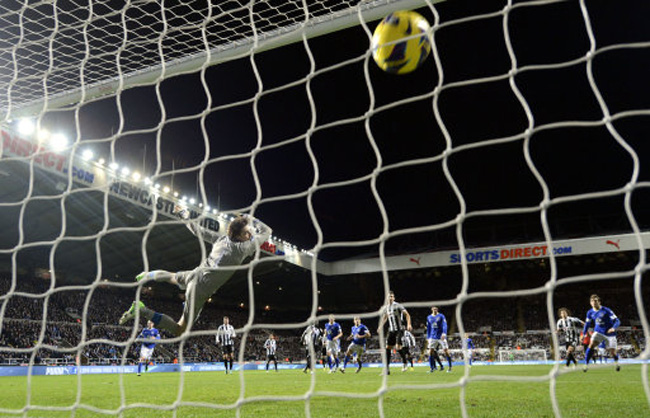 With star striker Demba Ba looking set for a move to Chelsea and his side now just two points clear of the drop-zone, Newcastle boss Alan Pardew is having anything but a happy new year.

Against Everton at St. James’ Park, the Magpies got off to the perfect start, when a Tim Krul punt evaded the Toffees’ defence (with Sylvain Distin and Johnny Heitinga colliding), leaving Papiss Cissé to head past Tim Howard and into the Everton goal. Cissé has struggled to click with strike-partner Ba, so the latter’s impending move to Stamford Bridge could allow Cissé to shine once again.

Anyway, the Toffees fought back and eventually pulled level just before the break, courtesy of an outstanding free-kick from Leighton Baines, who rocketed home the swerving equaliser with the outside of his left boot.

The home rallied after the break and almost found themselves ahead again, only for Shola Ameobi’s effort went fractionally wide. However, on the hour-mark, David Moyes’ men went in front, when sub Victor Anichebe, who had only been n the pitch for 90 seconds, fired home from close-range after great work from Nikica Jelavic.

Newcastle did their best to get level again, with Cissé going close, but ultimately it was the Toffees who secured all three points.

Everton go fifth while Newcastle find themselves dangerously close to the drop-zone.