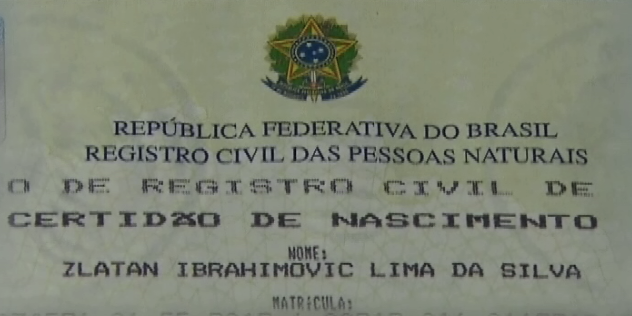 Now there’s the kind of headline that only comes around once in a blue moon. A Brazilian gentleman going by the name of ‘Franz Beckenbauer’ has taken the bold step of naming his newborn son ‘Zlatan Ibrahimovic’.

Beckenbauer, who was named so by his father in tribute to Der Kaiser, officially called his sprog ‘Zlatan Ibrahimovic Lima da Silva’ – though the administrative personnel at the hospital in Recife had to double check to see if they’d heard him correctly: “The woman said she had to send it to the judge for approval. I objected… If my name was Beckenbauer, why could his not be Ibrahimovic?”

Beckenbauer has yet to confirm quite why he chose Zlatan’s name, though he is hoping that his wee nipper will grow up to follow in the Swedish collosus’ footprints and score many goals for his club, Santa Cruz, who won the Pernambuco state championship three days after little Ibra was born: “I hope that in the future he will score a lot of goals playing for Santa Cruz, I will also bury his umbilical cord beneath the stadium to celebrate.”

Riiiight. They’re not all locked up are they?

Meanwhile, on the other side of the world, the real Zlatan has just bought himself an island off the coast of Sweden. The official line is that he will use it to hunt boar, deer and fish though we can’t help but feel that a Super-Villain HQ is just around the corner.