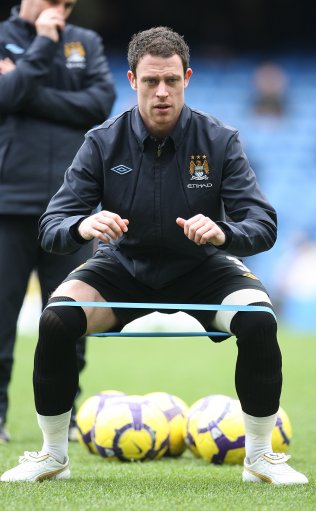 Bridge practising his ‘sitting on the bench’ technique

More famous in recent seasons for the whole sorry John Terry shagging-his-ex palavar than his performances on the pitch, ex-England full-back Wayne Bridge has left Manchester City in a loan deal with bright young things of the Championship, Brighton & Hove Albion.

As Man City have developed into a title-winning side, Bridge has found himself increasingly on the sidelines, making just eight appearances in the last two seasons for the Citizens. Loan spells with West Ham and Sunderland have hardly kickstarted the defender’s career either, but now he has a chance to rediscover his form under former Chelsea star Gus Poyet on the south coast. Indeed, Poyet is quite chuffed wth his new signing, saying:

“It’s difficult to say how happy I am because it’s not easy to get top-class players. He’s been one of the top three left-backs in this country for many years. We have all got to learn from him and I’m sure that he will have a very good season with us.”

“It’s going to be very nice to sit back and watch him on the pitch.”

With former Man Utd ‘keeper Tomasz Kuszczak also moving to the Amex this summer, the Seagulls could be ready to build on their decent 2011/12 campaign and challenge for a play-off place in the coming season.

Oh, and apparently City will be shelling out £90,000 a week for Bridge while he lines out for Brighton. Austerity my arse.