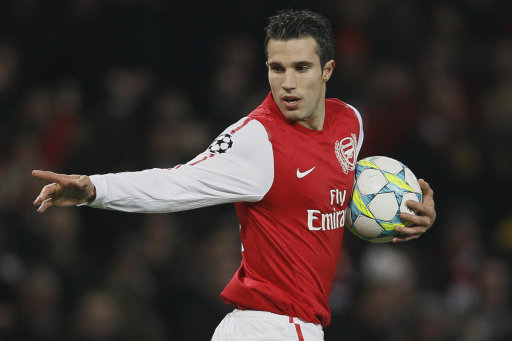 After seemingly burning his bridges with Arsenal courtesy of a rather blunt statement, Dutch striker Robin Van Persie is now rumoured to be pondering penning a new deal with the Gunners.

Most of these rumours are coming courtesy of Sky Sports News, and and may be a load of old tosh. However, RVP wouldn’t be the first footballer to announce he was fecking off due to a ‘disillusionment’ wth his club, before ultimately pulling a 180 and signing a new deal with the same club. Hirsute granny-magnet Wayne Rooney did just that at Man Utd and no-one seems to hold it against him now. But would Gooners be happy if the attacker bedded in at the Emirates for a few more seasons, despite his rant?

A forward line of Podolski, Giroud and Van Persie (with Walcott, the Ox and Gervinho in reserve) does look quite tasty. However, maybe Arsenal are better of cashing in on the 28-year-old injury-prone star now anyway. Thoughts?