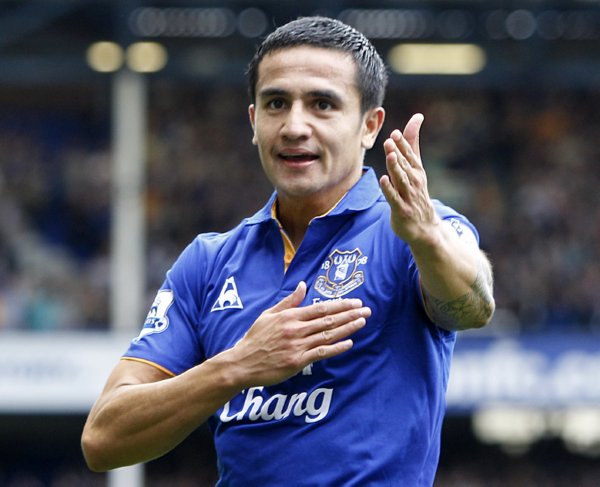 ‘Tis the end of an era people. After eight years of spring-heeled centre-back out-jumping, corner flag boxing, rugged midfield bastardry, emergency auxiliary strikership and all-round good egg-ery, Timmy Cahill is off in search of pastures new. Everton have agreed a fee said to be somewhere around the £1/1.5 million mark with the MLS, while Cahill himself has tentatively agreed ‘outline’ personal terms with New York Red Bulls.

A £1.5 million purchase from Milwall back in 2004 – which surely ranks him as one of the best ever Premier League bargains? – Cahill’s impeccable timing and spawning salmon-esque leap bagged him the lion’s share of his 68 goals (in 278 appearances) and while we can’t gloss over the fact that the scoring tailed off dramatically over the course of the last few years (we’re talking five-ish goals in two or three seasons), he continued to work his figs off in every game for the Toffees non-the-less.

It’s perhaps fair to say that he’s chosen the right time to call it as his powers begin to dwindle, but still, a legend departs and Red Bulls have gotten themselves a hell of a bargain.

Centre-halves and holding midfielders of the Premier League will have it just that little bit easier next season.