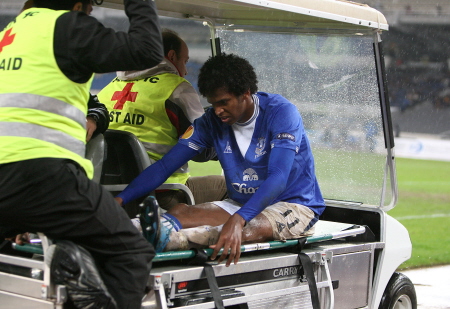 “Airport please! And step on it!”

It has been confirmed that Jo has left Everton and joined Galatasary S.K on loan until the end of the season. It was first reported that the Brazilian had been released from his temporary contract at Goodison Park and had returned to parent club Manchester City then, barely an hour later, the striker’s switch to the Turkish giants was officially announced.

The 22 year old has struggled for form this season with only two goals to his name and he compounded his fall from grace with Toffee’s boss David Moyes by going AWOL over Christmas (Jo flew home to Rio De Janeiro without club permission). That ‘breach of contract’ coupled with a lack of consistency has led to him not appearing in a matchday squad since mid December.

Jo’s long term future at City doesn’t look too promising either after having failed to make any notable impression at the club following his £18 million move from CSKA Moscow in July of 2008.

The rangy forward will be quickly reunited with former Everton team mate Lucas Neill at the Ali Sami Yen Stadium, after the Australian defender left Merseyside for Istanbul a matter of days ago.