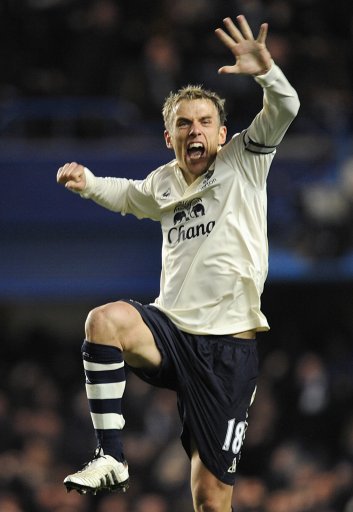 The Daily Mail are happily claiming this morning that Tottenham are in ‘advanced talks’ with Phil Neville – yep, you heard that right…Philip John Neville – over a January move to White Hart Lane.

The crux of the Mail’s report is that, with an offer of £1.5 million and a last chance to play Champions League football on the table, 33-year-old Neville is eager to effectively end his career with Spurs, though Everton boss David Moyes is thought to trying to engineer a player exchange clause into the deal that would see either David Bentley, Roman Pavlyuchenko or Vedran Corluka moving to Goodison in return.

The most sensational thing about all this guff? It’s apparently 100% true!

“I think Nev is a fantastic professional, a real leader and a great player. But I’m sure David Moyes knows just how important he is for his team.

“We played them twice recently and he is a real leader for them. David wouldn’t want to lose him, I’m sure, so it may be a difficult one.”