West Ham beat Cardiff 3-0 (5-0 on aggregate, we’ll have more photos up shortly) at Upton Park in the second leg of their semi to reach the Championship Play-Off Final at Wembley in emphatic fashion yesterday evening – though it seems like it may have been bad news for ‘Chris’, who appears to have lost his Best Man as a result… 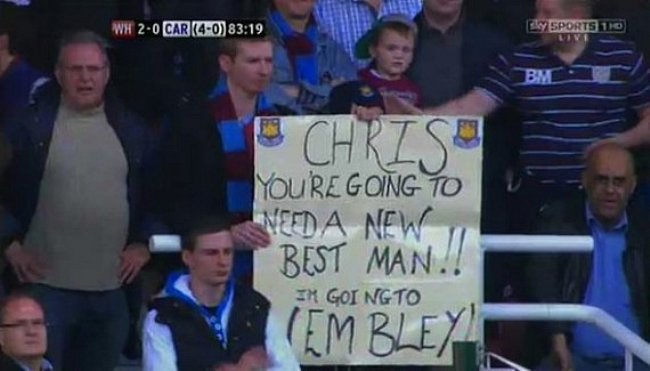 Ahh, the age old medium of ‘breaking the bad news with a cardboard sign on live television’. Textbook.

Best part? He’s obviously had to wait 83 long minutes with that sign under his seat before he could convince himself that the Hammers weren’t going to bin it and throw away a four-goal lead in the last 6 minutes.

Hopefully none of Chris’ other wedding guests are Chelsea fans, as the Play-Off Final just so happens to be on May 19th this year – the same day as the Champions League Final.