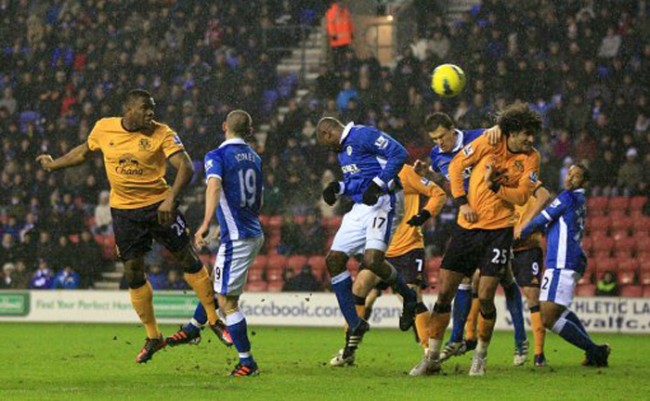 A late Victor Anichebe goal was enough to rob perpetual strugglers Wigan of a vital and rare victory. The defeat leaves the Latics bottom of the table and looking like dead certs for the drop.

The first-half was a disjointed, uninspiring affair, which wasn’t helped by the atrocious conditions. New-signing Darron ‘with an ‘O” Gibson missed the best chance of the half, with Steven Pienaar, on loan from Tottenham, impressing in midfield.

In the second period, David Moyes gave Nikica Jelavic his Everton debut in an attempt to break the deadlock but it was another sub, Phil Neville, who would open the scoring, albeit for the wrong side. Winger Jean Beausejour fired in a cross, which the former Man Utd man inadvertantly steered towards his own goal. Toffees ‘keeper Tim Howard should still have saved the deflected ball, but the spin bamboozled the usually reliable glovesman, and sailed into the net.

Robert Martinez’ side could smell victory, but then, with seven minutes on the clock, another sub, the perenially mediocre Victor Anichebe, nodded home a Leighton Baines centre, leaving Wigan to rue yet another missed opportunity to move off the bottom.

While the Toffees float around mid-table as per usual, surely the Latics are now destined for the drop?