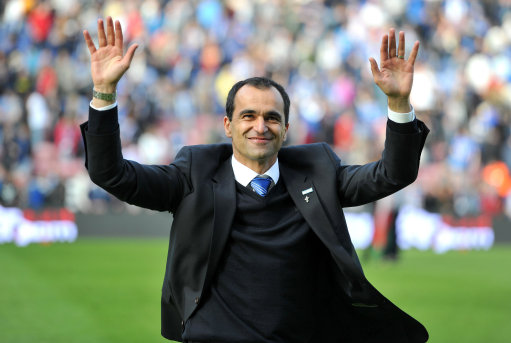 It was pretty much inevitable given the circumstances but the lure of getting his hands on Everton’s gargantuan transfer budget has proved too much for Roberto Martinez, with the Spaniard officially handing in his resignation at Wigan this morning.

Dave Whelan has granted Martinez permission to talk to other clubs after a fortnight’s worth of talks, but the Wigan owner is insistent that, as Martinez still has a year to run on his Latics contract, any potential suitors will still have to pay compensation.

Whelan is quoted on FA.com as saying:

“[Martinez] wanted permission to move so I’ve given that. He has 12 months left on his contract, so whoever comes in for him must pay the remainder of his contract.

“We will let him go but he’s on a 12-month rolling contract so if he moves someone will have to buy him out of his final year. Everton rang me and I said they have permission to talk to him.

“He feels he’s not the man to lead us back into the Premier League. I’ve got to accept what he feels. He loves Wigan and the fans. We have to move on now and want applications for the job.”

While Martinez’s record on paper, barring the FA Cup win of course, is hardly sparkling (Wigan have been crap for large swathes of his tenure) but he’s still forged himself a reputation as a good, young, progressive man-manager which is obviously what appeals to Everton.

It’ll definitely be a wrench for him to leave Wigan as his love for the club and city radiates from him whenever he’s talked about them/it in the past, but moving up the leagues like this is too good a career opportunity to pass up on. It kind of just feels right.

Any thoughts Pies fans? Is Martinez the man for Everton? Would any of the Goodisonites out there have preferred someone else to take the reigns?