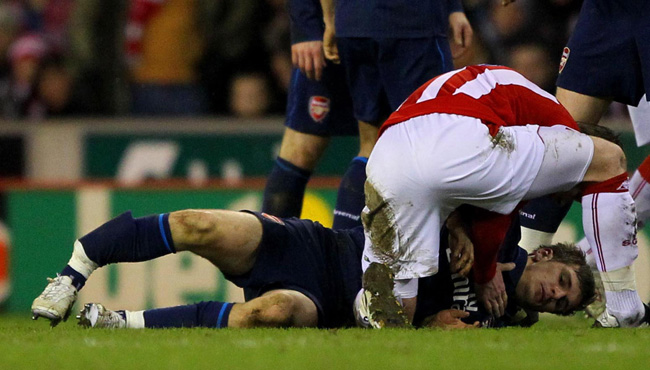 With the pitches of the Premier League starting resemble the battlefields of Europe in the First World War, with the bruised and broken bodies of young men strewn across the landscape,  one young star injured in action some time ago looks set to finally make his comeback.

Arsenal and Wales midfielder Aaron Ramsey broke his leg back in February at the Britannia Stadium after Ryan “not that type of player ” Shawcross clatterred into the gifted playmaker.  Much time has passed and many more players have been crocked since that fateful day, with the likes of Bobby Zamora and Hatem Ben Arfa two more recent victims of the “good old-fashioned English tackle”. However, in a slice of positive news amidst all the injury doom and gloom, Wales’ pint-sized caretaker manager Brian Flynn has spoken about Ramsey’s impending return to action:

“I’ve spoken with Aaron and he’s making great progress. He told me he will be back in full training in three weeks.

He’s a great talent and we all want him back playing again. It’s great news for Arsenal, Wales and of course, for Aaron himself.”

While Croatian striker Eduardo never really rediscovered his best form after a shocking injury suffered away at Birmingham City in February 2008, Arsene Wenger will be hoping that Ramsey fully recovers from his leg-break, both physicially and mentally, and gives the Gunners a welcome boost before the end of the year.