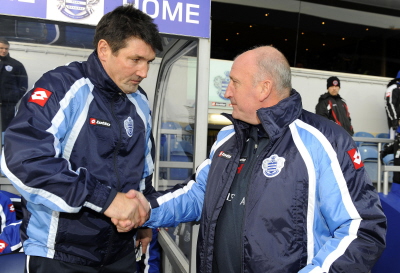 The revolving door on the manager’s office at Loftus Road has struck another unlucky schmuck on the backside this morning as Queens Park Rangers have confirmed that Paul Hart has left the club after just five games in charge.

Hart becomes the sixth full-time managerial casualty at QPR since Flavio Briatore was installed as chairman in August 2007; Iain Dowie, Jim Magilton and Paolo Sosa (amongst several others) have all met with similar fates during the impatient Italian loon’s tenure at Loftus Road, with other ‘caretakers’ also coming and going in that time.

The circumstances surrounding Hart’s departure are still unclear with some sources blaming a fall out with the board (which seems highly feasible) over transfer dealings and others citing a recent falling out with Adel Taarabt as the reason for the former Portsmouth manager’s sudden exit.

Assistant manager Mick Harford has been handed the reigns on a temporary basis until the end of season – if he makes it that far.

What do you make of Briatore, QPR fans?