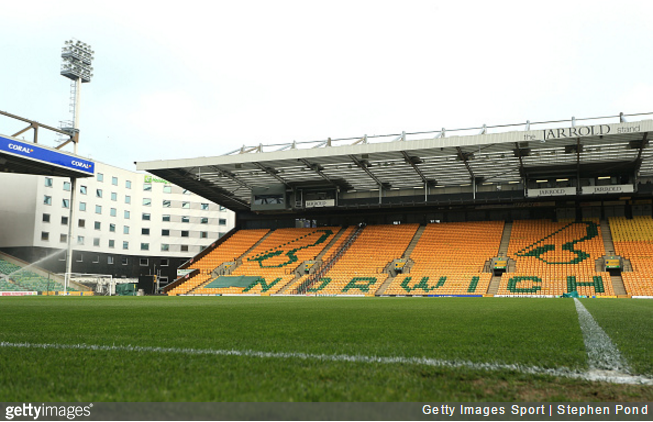 Football is shadowed by a bad reputation for its reception and treatment of the LGBT community.

Indeed, much has been made of the almost total lack of publicly gay footballers at all levels for fear of reprisals and abuse from fans, other players and even colleagues.

So it’s heartening that many clubs are taking positive steps to include everybody in life’s rich tapestry. Norwich City are the latest to make such a move. The Championship club are sponsoring the city’s upcoming Norwich Pride event taking place this weekend.

The club will be flying the LGBT rainbow flag above Carrow Road and their Captain Canary mascot will be joining in the festivities before Saturday afternoon’s pre-season friendly against German club Hannover 96.

All good so far, of course. But there’s always one, and here’s a shout out to the Canaries’ social media captain who hit back at one puzzled supporter in superb fashion.

Having announced their Pride sponsorship and providing a link to the day’s fun and frolics on Facebook, one mean-spirited commenter retorted: “What the hell has this to do with football?”

After cracking their knuckles and grinning wildly (probably), the person running Norwich’s account replied simply: “Everything”… 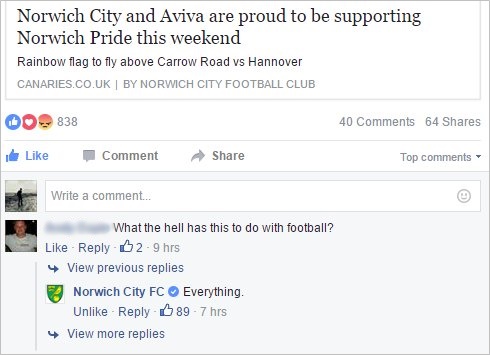 And they’re right of course. Football is a unique sport and one rightly enjoyed by millions – nay, BILLIONS – worldwide.

History and circumstance has pushed the LGBT community to the fringes of the game a lot of the time, and it means “everything” to the game that people of all stripes, sexuality, colour and religion are encouraged to join in.

Top marks for the Canaries. This little birdie wishes them the best of luck for the upcoming season.