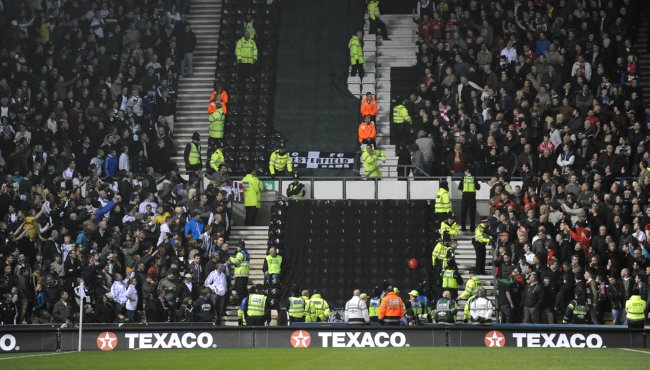 Last night, in a sucking wound of a retail park on the outskirts of town, somewhere between Toys ‘R’ Us and the David Lloyd fitness centre, at the far end of the JJB Sports carpark, a particularly unaesthetic 94th-minute winner from Jake Buxton saw Derby County beat Nottingham Forest 1-0 and the likelihood is that you probably couldn’t care less.

Truth be told, it was a shockingly turgid game – rearranged from a sharp, glistening but sadly health and safety-infringing Sunday afternoon in early February to a cold, drab Tuesday evening in March – with the BBC Radio Nottingham matchday commentary team struggling in vain to polish what was so obviously a turd playing out in front of them. Even the usually ebullient Colin Fray had completely given in by half-time:

“Let’s take a moment to sum up that first 45 minutes,” *second of silence* “…right, let’s move on and see how The Stags are getting on against Fleetwood…”

All this while fans were audibly pleading with 62-year old co-commentator (and former Forest and Derby midfielder) John McGovern in the background to lace up his old size nines and attempt to liven up proceedings with a run-out in the second-half.

There were more throw-ins than passes completed in the first-half. Whichever way you look at it, it doesn’t make for much of a spectacle. Unless you’re a Stoke fan of course.

The second half plodded on in an identical vein, long hoof after long hoof met with return long hoof after return long hoof, until 5’8″ Buxton stooped under everyone to head home in the added time that had accrued as a result of delays caused by Derby captain Shaun Barker being stretchered off with a suspected dislocated knee cap and Forest’s Marcus Tudgay picking up a second yellow card in the last few seconds of normal time. The only two incidents of the half.

In summary; it was a poor, poor game of football. Squalid. Bereft. The only real talking point being the risible (and, sadly, almost inevitable) chanting that emanated from sections of the home crowd about Forest’s recently deceased chairman, Nigel Doughty.

Chants such as “Where’s your chairman gone?” and “You’re going down with your chairman,” were sung at several intervals and everyone was sickened and appalled as you’d expect. Indeed, Doughty’s elderly father was in attendance. Can you even fathom what must have been going through his mind, let alone the pit of his stomach?

Derby have since set about issuing a formal apology while Forest players, staff and fans alike are all going on record as being up in arms at their opponent’s fans’ behaviour – and rightly so, you may well suggest.

However, you can’t help but feel that, amid the frothing and posturing, the depressingly inescapable verity is that the very same ‘sections of the Forest support’  – namely, the thick-eared troglodytes at the back – would have been chanting the exact same things if it were Derby who had recently lost one of their number. Call me a heartless cynic, but I’d have a shiny halfpenny on it. Sadly, these are the people we are routinely forced to share our football with.

It’s these ‘sections of support’ – the same sections who got away with racially abusing Tom Adeyemi, who monkey-chanted at Yaya Toure and Mario Balotelli in Porto, who leer ‘paedo’ jibes at Arsene Wenger, who chide and taunt about Munich, Hillsborough and Heysel, etc, etc, etc – that desperatly need to be rooted out and dispensed with. Preferably into an active volcano.

It’s not terrace banter, it’s poisonous bile from amidst the nigh-on impenetrable safety of an almost entirely faceless crowd.

Yes, the chants at Pride Park were malicious, grievously insensitive and vulgar, I’m not trying to defend or absolve anyone of that, but we as Forest fans – nay, as football fans – shouldn’t kid ourselves for one second that the exact same inconsiderate dunces that litter terraces the length and breadth of the land each and every week would have conducted themselves any differently in the same situation.

F**kwits are f**kwits, regardless of the shirt on their back.