The 225th Merseyside derby ended with both sides taking a point apiece after a Danny Ings goal was cancelled out by Romelu Lukaku. 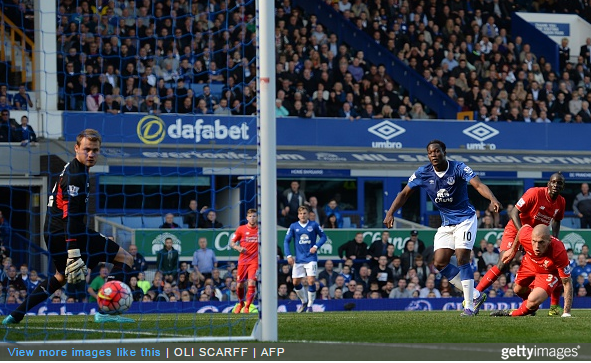 Former Chelsea hitman Lukaku was superb throughout, proving to be a thorn in the side of the Liverpool defence all afternoon.

Steven Naismith and James McCarthy also forced Simon Mignolet into a couple of superb saves as the Toffees pushed for the opener.

However, it was the visitors who would open the score on 41 minutes, with Danny Ings heading home a James Milner corner after slack marking from Ross Barkley.

That lead only lasted four minutes for the Reds, with more poor defending, this time courtesy of Emre Can, allowing Lukaku to fire past Simon Mignolet.

After the break, the hosts looked the more likely to take the lead, with Barkley going close.

The game continued to be played with an edge, with a number of flashpoints.

However, ultimately the game would ended all-square, a result which sees Roberto Martinez’s side go seventh in the table, with Brendan Rodgers’ charges 11th. A point away at Goodison is hardly a bad result for any side and one which may very slightly ease the pressure on the Liverpool boss after a disappointing start to the season.