1. West Bromwich Albion (2005)
With the odds stacked massively against the Baggies, on the final day of the season they did the only thing they could and beat Portsmouth 2-0. Elsewhere, Crystal Palace drew with Charlton, while Norwich and Southampton both lost. West Brom became the first club to be bottom of the Premier League at Christmas and avoid relegation. Even more miraculous, the escape was managed by Bryan Robson (pictured). 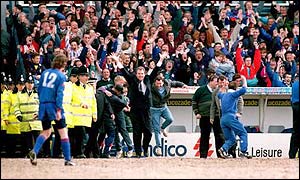 2. Oldham Athletic (1993)
Athletic overturned an eight-point deficit in seven days. Against all odds, Joe Royle’s men won their final three matches of the season against title-contenders Aston Villa, Liverpool and Southampton. Safety was secured on the final day of the season when they defeated Saints 4-3 in a memorable encounter.

3. Carlisle (1999)
Carlisle kicked off their final match of the 1998/99 season bottom of the Football League, one point behind Scarborough. Fast-forward into injury time, and Carlisle are drawing 1-1 against Plymouth Argyle. Step up on-loan keeper Jimmy Glass, who scored an invaluable 95th-minute winner. Without Glass’s goal, Carlisle would have been relegated. (And look how young Jeff Stelling looks!) 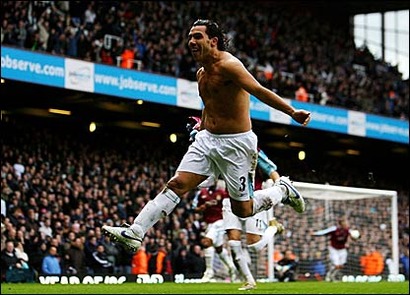 4. West Ham Utd (2007)
It was less than two years ago when Carlos Tevez scored the winning goal against future employers Manchester United to start a run which somehow kept West Ham in the Premier League, while Neil Warnock’s Sheffield United went down. 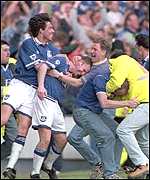 5. Everton (1994)
Everton needed a final-day victory against Wimbledon. It looked bad when Wimbledon went into a two-goal lead. But a Graham Stuart penalty and a stunning strike from Barry Horne put the Toffees back in contention. Stuart then scored a goal that would later feature in match-fixing allegations against Hans Segers. (The keeper was cleared of any wrongdoing, but his attempted save was poor.) Who went down instead of Everton? Sheffield United -Â the Blades don’t have much luck, do they!

6. Luton Town (1983)
Most football fans remember the moment when David Pleat, clad in a nasty beige suit, skipped onto the pitch as if he’d won the EuroMillions lottery. It happened following Luton’s final match of the season – to retain their top-flight status, the Hatters had to win at Man City (City needed only a draw). They did so thanks to a scrappy goal by cult hero Raddy Antic. An amazing act of escapology, as Uncle John Motson rightly said.