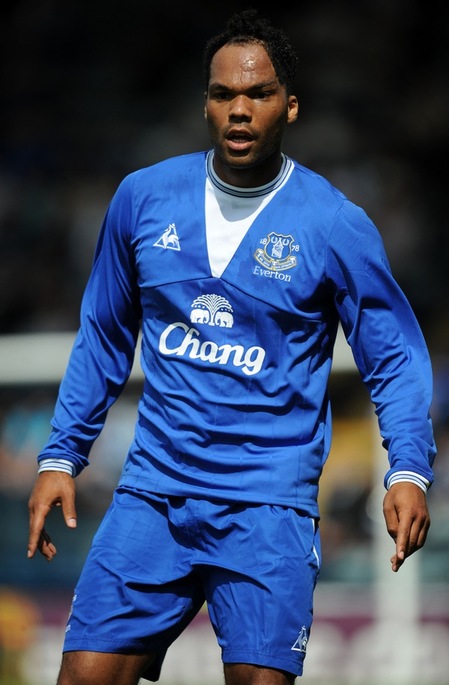 Joleon Lescott wants to leave Everton. Their new home kit has been cited as a key factor
Seriously though, can you really blame Lescott for being tempted by a contract that is at least twice as fat as the one he’s currently picking up? Of course not. After all, he left Wolves before to go to a bigger club for more cash, and if he goes to Man City, he’s doing pretty much the same thing. That’s the way a career works. It’ll be very disappointing for the Toffees if the move happens though. I feel your pain.
I can imagine Everton fans shouting at their computer screens at the unfairness of it all: “But we’re a bigger club than City and we finished above them last season!!”
Yes, Everton did finish above City last season, but that was last season. Since then, City’s money has changed the Premier League landscape beyond recognition. And anyway, these days the “size” of a club is measured by the zeros on its bank statement, not by the trophies in the club museum. On those shiny new terms, Everton can’t hope to win a straight fight against the Man City monster. And hell, if Arsenal can’t keep its players from running off to Eastlands, I don’t think David Moyes stands much of a chance of keeping his stars. As for Lescott’s five-year contract, which has almost four years left on it, well…Â the cold reality is, contracts mean nothing in football today. Much like the concept of loyalty, in fact.
Still, I hope Everton squeeze every last penny out of City. Apparently they’ve already turned down a couple of City’s bids for Lescott (Â£15m and then Â£18m, according to reports), but it’s so difficult to stop a player moving on if his heart is set on it. Where there’s a will etc.
What is certainly true in all of this is that Man City are wasting no time in alienating fans of every other club in the Premier League. Much like Chelsea did when Roman Abramovich first appeared. I have always liked City but a man is entitled to change his mind. Just ask Joleon Lescott…