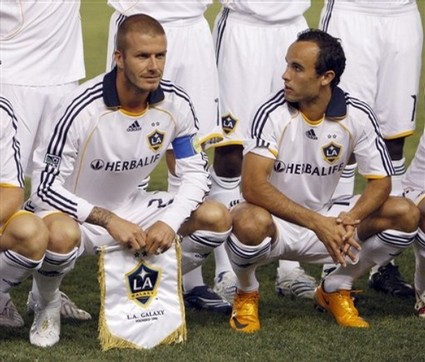 Landycakes has stood up to be counted. In an explosive quote from Grant Wahl’s new book, ‘The Beckham Experiment’, the US midfielder reveals a shocking level of emnity and resentment towards Golden Balls. Get a load of this:
“All that we care about at a minimum is that he [Beckham] committed himself to us. As time has gone on, that has not proven to be the case in many ways – on the field, off the field.
“Does the fact that he earns that much money come into it? Yeah. If someone’s paying you more than anybody in the league, more than double anybody in the league, the least we expect is that you show up to every game, whether you’re suspended or not.

“Show up and train hard. Show up and play hard. Maybe he’s not a leader, maybe he’s not a captain. Fair enough. But at a minimum you should bust your ass every day. That hasn’t happened. And I don’t think that’s too much for us to expect. Especially when he’s brought all this on us.
“I can’t even say he’s a good team-mate any more. He’s not shown that. I can’t think of another guy where I’d say he wasn’t a good team-mate, he didn’t give everything through all this, he didn’t still care.
“But with Beckham, I’d say no, he wasn’t committed. Let’s say he does stay here three more years. I’m not going to spend the next three years of my life doing it this way … I don’t want to have soccer be this way. I’ve got to confront it somehow. If that’s the way he’s going to be, fine, then hold him accountable. Bench him. Just say, ‘We’re not going to play you, we don’t think you’re committed’.”
Yep, it’s going to be slightly awkward in the Galaxy changing room when Becks returns later this month. And I thought Becks was renowned for being a good trainer. I guess he spent too much time gawping at Lakers cheerleaders.
PS. I refer you to a post on Pies that was published almost two years ago:
The Snapshot: David Beckham and Landon Donovan hate each other (maybe)