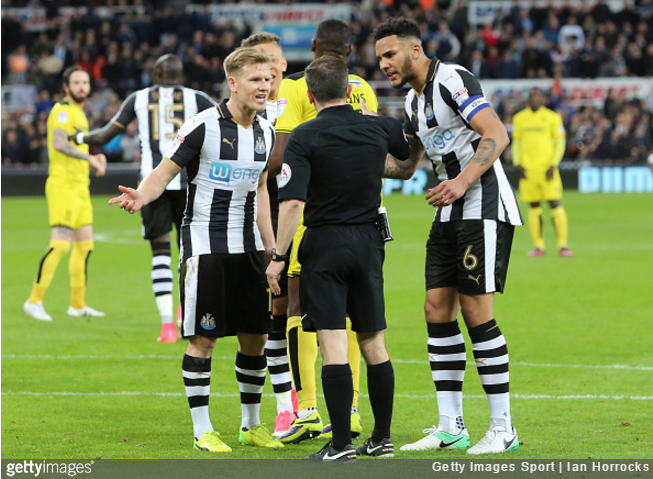 Newcastle United went back to the top of the Championship on Wednesday night, courtesy of a hard-fought 1-0 win at home to Burton Albion.

However, despite the win, Rafa Benitez and co. were left fuming after referee Keith Stroud made an utter dog’s dinner of a Matt Ritchie penalty kick.

The incident happened in the first-half, when the Magpies were awarded a spot-kick by Stroud.

However, after Ritchie had successfully converted the penalty, the official promptly disallowed the goal before giving a free-kick to Burton, a decision which left the Magpies flummoxed.

The ref in the Newcastle v Burton game disallowed Matt Ritchie’s penalty and gave a freekick the other way. Absolutely bizarre. pic.twitter.com/IXlu0nvL32

After the game, the Professional Game Match Officials Limited (PGMOL) released a statement which explained the whole balls-up:

As Matt Ritchie took the kick, Dwight Gayle encroached in the penalty area. An indirect free-kick was awarded to Burton, but the Laws of the Game state that that the penalty kick should have been retaken.

“Unfortunately the referee has misapplied the law. Keith and his team are understandably upset at the lapse in concentration and apologise for the mistake.

Quite a big mistake from Mr, Stroud, who’ll no doubt be refereeing a few lesser league games in the foreseeable future.

Despite that drama, it was Ritchie himself who went onto score the only goal of the game, via a fine curling effort on 68 minutes….

Newcastle now find themselves a point ahead of Brighton, with both sides within touching distance an automatic place in next season’s Premier League.