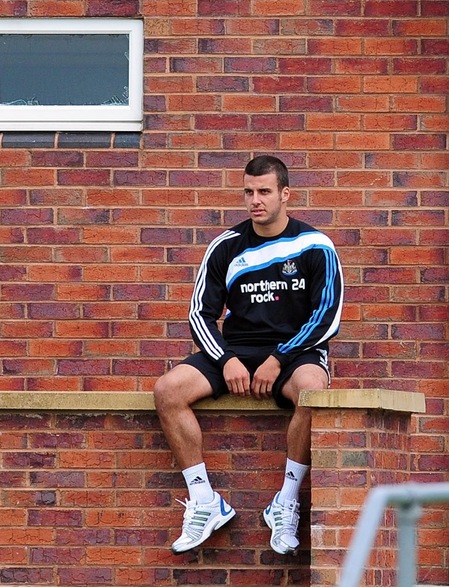 Poor Steven Taylor, stuck in the Championship while all the cool kids have fun in the Premier League. He has even started sitting on walls, looking moodily into the distance. It’s a worrying sign.
Several Prem clubs are reportedly interested in rescuing the stout Englishman from Newcastle United, namely Aston Villa, Fulham and Everton. Villa really need a decent central defender to replace the retired Martin Laursen, while Fulham and Everton could still lose Brede Hangeland and Joelon Lescott before the transfer window shuts.

Newcastle want to keep Taylor, as he is central to their bid to “bounce back” into the top flight. But a bid of around £10m might be enough to convince them to do business. Ideally, the Magpies will keep Taylor and cash in on the useless Fabricio Coloccini. Espanyol have admitted that the big-nosed Argentine is on their shopping list; I’m sure Newcastle would be happy to see the back of him.
Where do you think Taylor will end up? Vote below:

MORE TAYLOR
Video: Steven Taylor is zany, charismatic and smart
Newcastle’s yellow away kit for 09/10 is perfect for cowards