To mark the FA’s 150th birthday they’re doing all sorts of bits and bobs, including having England ‘keeper Joe Hart pose with the most expensive book he’s ever likely to get his paws on – the original copy of the FA ‘Minute Book’, i.e, the original hand-written draft for the laws of association football which was first penned in 1863 and is worth more than £1,000,000.

Yowsers! Careful with that thing Joseph. No wonder he looks a bit nervous about the whole ordeal… 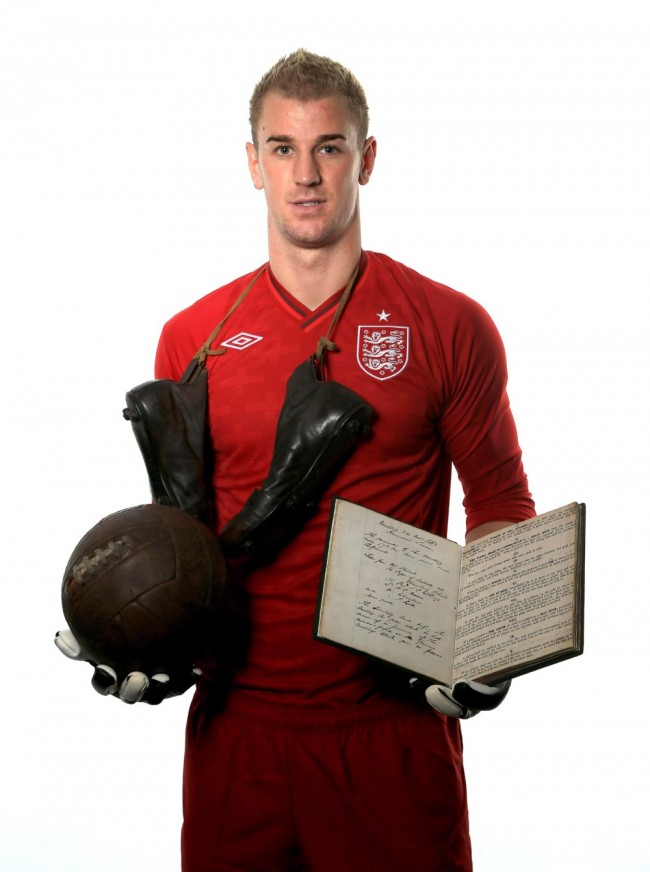 Written by Ebenezer Morley, the first secretary of the FA, the ‘Minute Book’, featuring the 13 original laws of organised football, is pretty much ‘Genesis’ when it comes to our sainted sport – coincidentally, back in 1863 the law was decreed that “no player shall carry the ball”, making Hart’s position look a little redundant given the circumstances.

Here are those 13 original rules in full…

2. The winner of the toss shall have the choice of goals. The game shall be commenced by a place kick from the centre of the ground by the side losing the toss, the other side shall not approach within 10 yards of the ball until it is kicked off

3. After a goal is won the losing side shall kick off and goals shall be changed

6. When a player has kicked the ball any one of the same side who is nearer to the opponent’s goal line is out of play and may not touch the ball himself nor in any way whatever prevent any other player from doing so until the ball has been played; but no player is out of play when the ball is kicked from behind the goal line

8. If a player makes a fair catch he shall be entitled to a free kick, provided he claims it by making a mark with his heel at once; ad in order to take such kick he may go as far back as he pleases, and no player on the opposite side shall advance beyond his mark until he has kicked

9. No player shall carry the ball

10. Neither tripping nor hacking shall be allowed and no player shall use his hands to hold or push his adversary

11. A player shall not throw the ball or pass it to another

12. No player shall take the ball from the ground with his hands while it is in play under any pretence whatever

13. No player shall wear projecting nails, iron plates, or gutta percha on the soles or heels of his boots

Incidentally, the cost for a football club to join the FA back then was a princely £1 and one shilling. We imagine the rates have gone up ever-so-slightly since then.