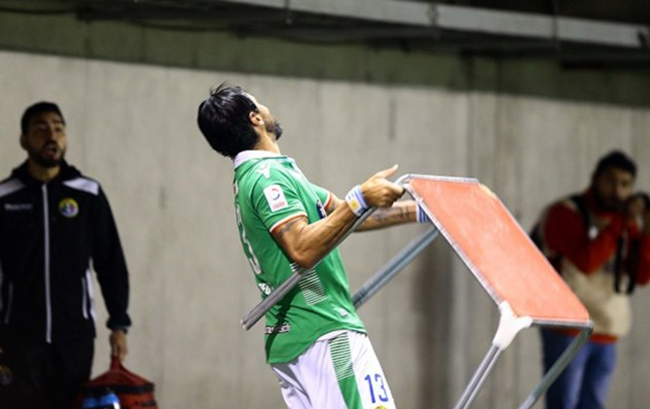 Sebastian Abreu more than lived up to his “El Loco” nickname at the weekend after launching a table – an actual metal table – at his own supporters during a Chilean Primera Division match.

Audux Italiano’s supporters had spent much of the game taunting the hapless 41-year-old striker, who has struggled to make an impact since signing for the club last December.

This game was no different, with Abreu missing a string of chances during a goalless draw against Antofagasta that left the club with one win and seven points to their name after 11 league games.

Sebastian “Loco” Abreu living up to his nickname in Chile… threw a table at a group of his own fans who were criticising him from the stands. pic.twitter.com/zZFydJdwSS

The incident took place at the final whistle, with Abreu venting his frustrations, WWE-style, via a fold-up table positioned at the edge of the pitch.

No fans were injured during the incident, though Abreu’s pride is likely to have taken a battering.

As well as scoring a famous Panenka penalty for Uruguay at the 2010 World Cup, Abreu has also played for no less than 26 clubs during his long and nomadic career – that’s a Guinness World Record.

Given this latest incident, something tells us he could be on the move to No.27 very soon.