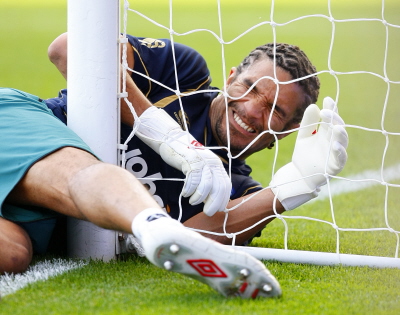 There are a number of reports this morning suggesting that David James could be on the verge of making a surprise loan switch to Stoke City. The Portsmouth keeper is eager to play regularly to secure a place in England’s World Cup squad and Pompey are desperate to partially remove James from their wage bill as the financial crisis at the club deepens.

Stoke manager Tony Pulis is keen to effectively take up the final six months of James’s contract at Pompey and has promised the veteran stopper a further one year deal in the summer.

There is, however, one issue that may put the move in jeopardy, as Stoke are keen for Portsmouth to contribute towards the 39-year-old’s £40,000-a-week pay package – but Pompey simply cannot afford to pay a player who wouldn’t be at the club as they look to ease their debt problems.

On the international front, with Joe Hart in such good form and Robert Green appearing to be Fabio Capello’s first-choice keeper at the moment, would a move to Stoke necessarily get James back into England contention anyway? The only way I can see him making the World Cup squad would be by displacing Ben Foster (not a particularly difficult task) and being included as a third-choice keeper.