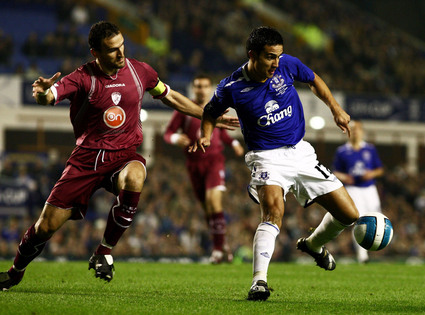 A solid home win for David Moyes’s men. Tim Cahill, who lasted 65 minutes before being substituted, scored on his return from a long-term injury. It’s hard to underestimate just how much Everton have missed the combative Aussie since he last played for them in March. He’s their key player, their talisman, their heartbeat. Mikel Arteta has been marvellous in Cahill’s absence, but he and his team-mates â€“ not to mention Everton fans â€“ will be delighted to have Tiger Tim back in action.
Everton would have kept a clean sheet but for Joleon Lescott’s sloppy mistake. However, they should still have more than enough quality to go through against a Larissa team which is a class below the Merseysiders.
Watch the goals after the clickâ€¦