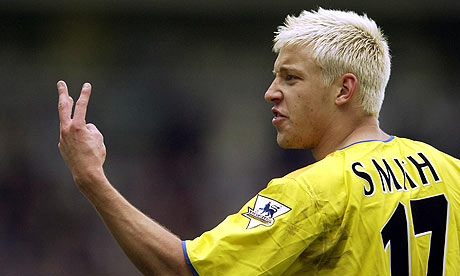 Championship high-flyers Leeds United are reportedly working towards securing loan deals for a brace of former fans’ favourites, with both Newcastle midfielder Alan Smith (can you believe that he’s 30?) and recovering Tottenham crock Jonathan Woodgate both being linked with temporary returns to Elland Road.

Leeds manager Simon Grayson has admitted his interest in signing out-of-favour Smith until the end of the season, telling the PA:

“He’s a good player and forget any affinity he has with the club in the past, if you get a player of Alan’s ability then obviously you would have to be interested. We are in the market to make us better.”

Grayson also listed Woodgate (along with a few other no-mark South American also-rans) amongst the players he’d be interested in acquiring during the transfer window:

“We’ve been linked with many players. Smith, Woodgate, Kaka, Messi! Smith is a good player, Woodgate is a good player and we want good players at this club. They both have fantastic footballing ability, experience and know-how.

“Whether I intend to [make enquiries], we will have to wait and see where we go with it.”