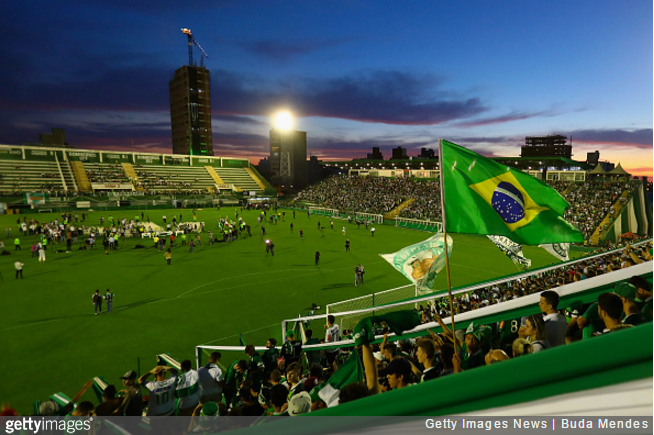 There were touching scenes right across South America on what would have been the night Chapecoense played Ateltico Nacional in the final of the Copa Sudamericana.

Thousands of fans gathered to both mourn and pay tribute to the 76 people who lost their lives when Chapecoense’s team plane crashed just outside the Colombian city of Medellin in the early hours of Tuesday morning.

Despite the game being cancelled, 45,000 supporters flocked to the Atanasio Girardot stadium in Medellin as the streets outside also filled with droves of people observing an impromptu act of solidarity and remembrance.

There were similar scenes at Chapecoense’s Arena Conda stadium in southern Brazil, where fans also gathered to honour their team in a heart-breaking service that featured a military parade and a mass wake.

The 11 surviving members of the decimated team also walked out of the tunnel together, arm in arm…

From my heart, thank you, Colombia. This great sadness, immense for the families, for all of us…

The expressions of solidarity that we have found here have offered a great deal of comfort.

Rather brilliantly, Fox Sports did their bit by airing ’90 minutes of silence for Chapo’ while the game itself was supposed to be being screened…

Chapecoense was supposed to play Atletico Nacional now. Fox Sports in Brazil airing a black screen with a hashtag “90 minutes of silence” 👏 pic.twitter.com/QbBw5XWp8v

Egads, we’re welling up here. The outpouring of support and unity from the worldwide football family has been truly overwhelming.